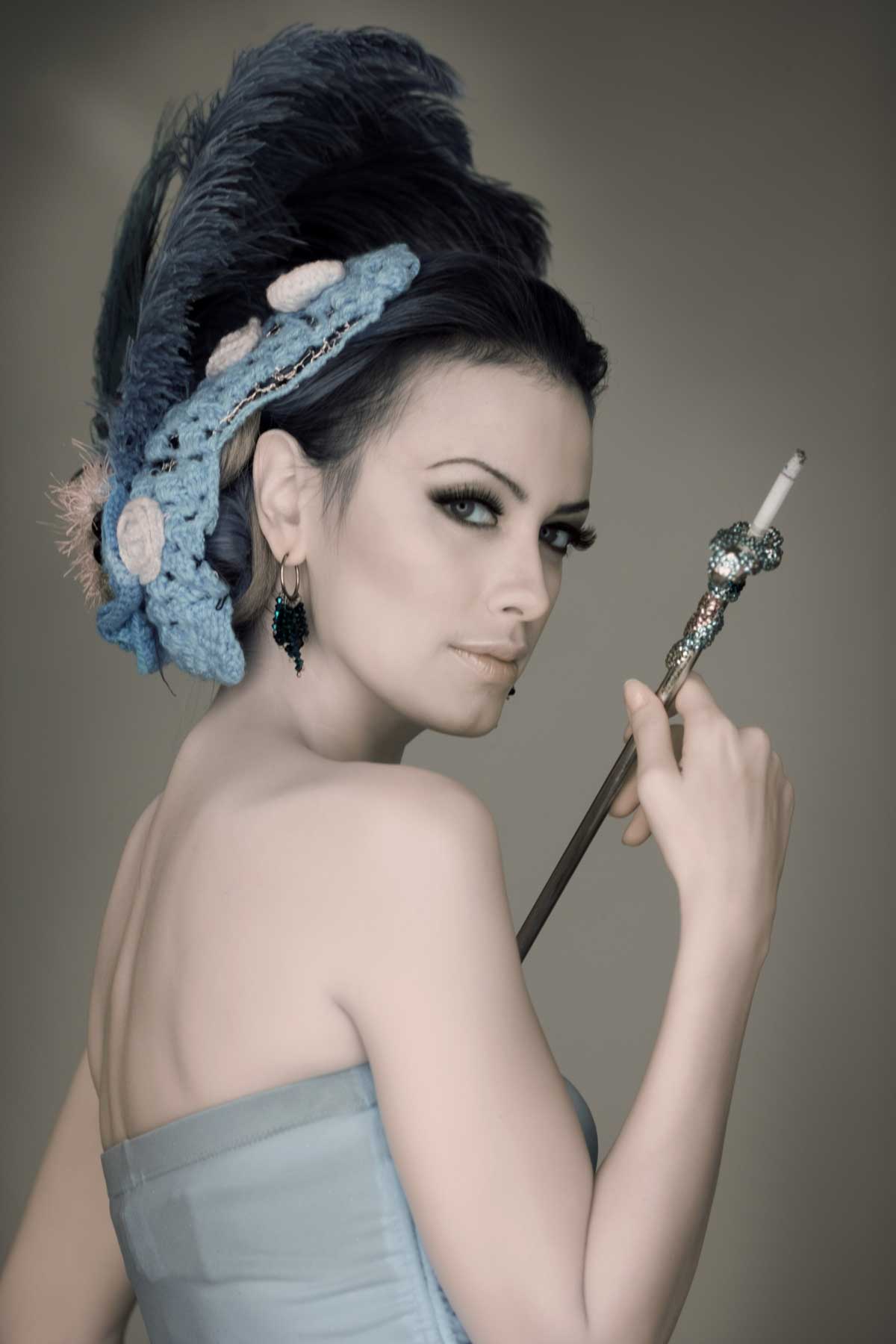 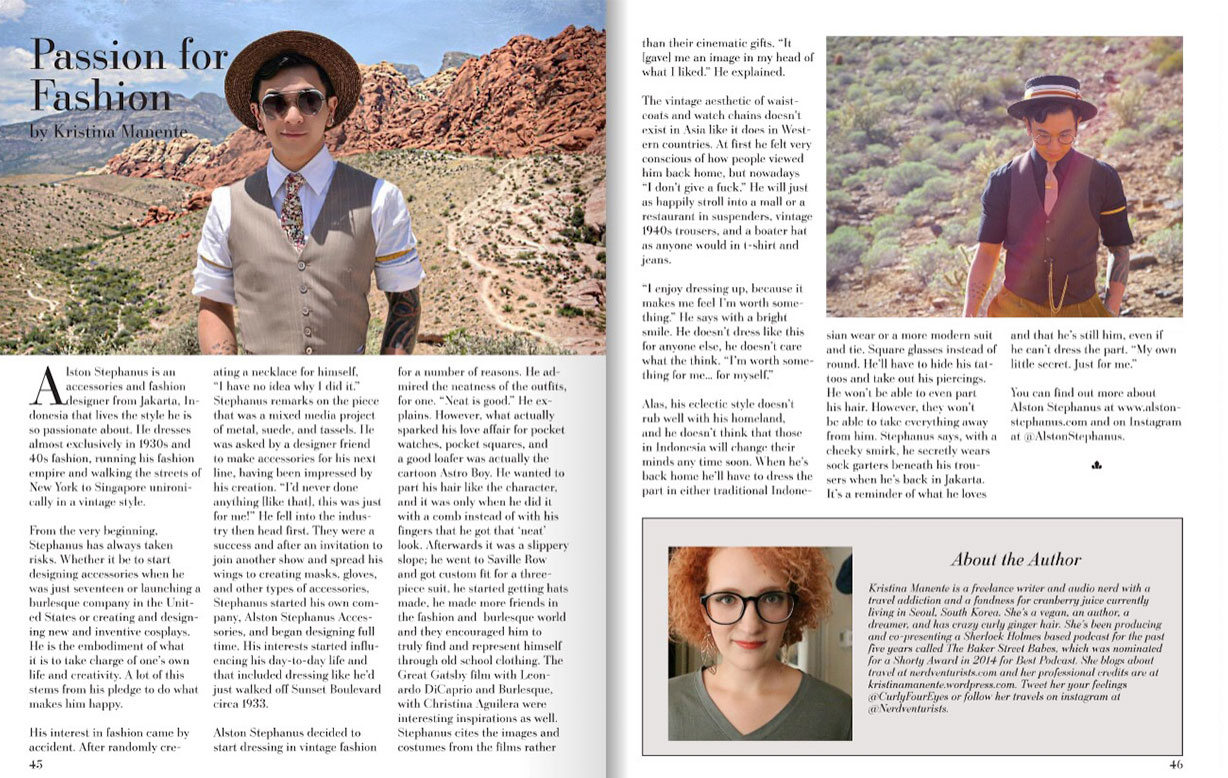 Alston Stephanus is an accessories and fashion designer from Jakarta, Indonesia that lives the style he is so passionate about. He dresses almost exclusively in 1930s and 40s fashion, running his fashion empire and walking the streets of New York to Singapore unironically in a vintage style.

From the very beginning, Stephanus has always taken risks. Whether it be to start designing accessories when he was just seventeen or launching a burlesque company in the United States or creating and designing new and inventive cosplays. He is the embodiment of what it is to take charge of one's own life and creativity. A lot of this stems from his pledge to do what makes him happy.

His interest in fashion came by accident. After randomly creating a necklace for himself, "I have no idea why I did it." Stephanus remarks on the piece that was a mixed media project of metal, suede, and tassels. He was asked by a designer friend to make accessories for his next line, having been impressed by his creation. "I'd never done anything [like that], this was just for me!" He fell into the industry then head first. They were a success and after an invitation to join another show and spread his wings to creating masks, gloves, and other types of accessories, Stephanus started his own company, Alston Stephanus Accessories, and began designing full time. His interests started influencing his day-to-day life and that included dressing like he'd just walked off Sunset Boulevard circa 1933.

Alston Stephanus decided to start dressing in vintage fashion for a number of reasons. He admired the neatness of the outfits, for one. “Neat is good.” He explains. However, what actually sparked his love affair for pocket watches, pocket squares, and a good loafer was actually the cartoon Astro Boy. He wanted to part his hair like the character, and it was only when he did it with a comb instead of with his fingers that he got that ‘neat’ look. Afterwards it was a slippery slope; he went to Saville Row and got custom fit for a three-piece suit, he started getting hats made, he made more friends in the fashion and burlesque world and they encouraged him to truly find and represent himself through old school clothing. The Great Gatsby film with Leonardo DiCaprio and Burlesque, with Christina Aguilera were interesting inspirations as well. Stephanus cites the images and costumes from the films rather than their cinematic gifts. “It [gave] me an image in my head of what I liked.” He explained.

The vintage aesthetic of waistcoats and watch chains doesn’t exist in Asia like it does in Western countries. At first he felt very conscious of how people viewed him back home, but nowadays “I don’t give a fuck.” He will just as happily stroll into a mall or a restaurant in suspenders, vintage 1940s trousers, and a boater hat as anyone would in t-shirt and jeans.

As a designer of accessories, I established my company in 2005. I discovered that the materials I utilized in my accessories set me apart from other designers. Using Swarovski crystals, exotic stones, unique beads, and a variety of feathers and lace along with brass and silver, it was clear to me that my imagination was the limit to my creations. Accessories range from the ornate wearable designs to avant-garde runway fashions. My collections have encompassed necklaces, bracelets, earrings, and rings, as well as extravagant brooches, fans, cigarette pipes, and specialty headpieces.

Alas, his eclectic style doesn't rub well with his homeland, and he doesn't think that those in Indonesia will change their minds any time soon. When he's back home he'll have to dress the part in either traditional Indonesian wear or a more modern suit and tie. Square glasses instead of round. He’ll have to hide his tattoos and take out his piercings. He won’t be able to even part his hair. However, they won't be able to take everything away from him. Stephanus says, with a cheeky smirk, he secretly wears sock garters beneath his trousers when he's back in Jakarta. It's a reminder of what he loves and that he’s still him, even if he can’t dress the part. "My own little secret. Just for me.”